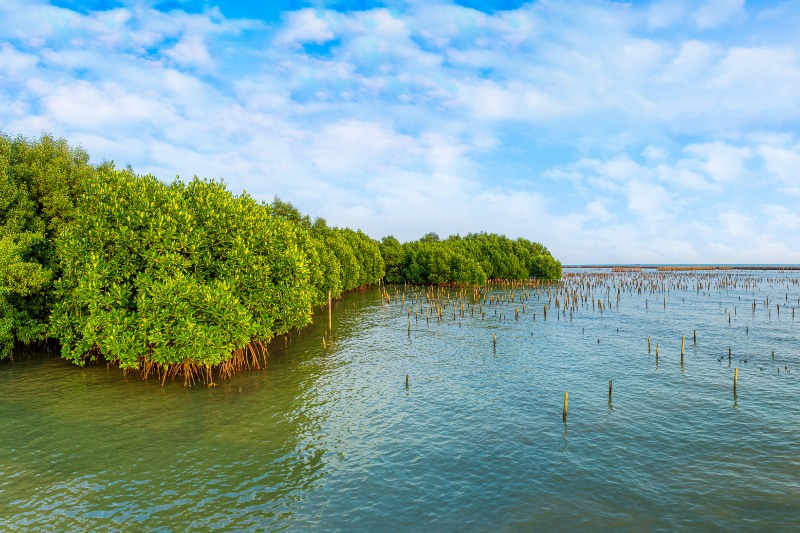 Indonesia and Singapore plan to collaborate on a study of carbon collected and stored by coastal and marine ecosystems. The blue carbon project’s findings might help Indonesia determine how much carbon dioxide it can absorb and yet fulfill its emission reduction goal.

According to the assistant to the deputy for climate change and disaster management at the Coordinating Ministry for Maritime Affairs and Investment, the pilot project will begin on Setokok Island in Riau province by the end of this year or early 2023. Setokok Island was chosen as one of the areas for a government-run mangrove rehabilitation initiative because of its potential blue carbon, the scale of its mangrove forests, and the diversity of its mangroves.

Indonesia has lost a large area of mangroves over the years, mainly due to abrasion and land use changes. It has 3.36 million hectares of mangrove habitats and around 756,000 hectares of potential rehabilitation sites. The Indonesian Peatland and Mangrove Restoration Agency have highlighted Riau province as among nine of 34 provinces for its mangrove rehabilitation initiative. Indonesia has a huge potential amount of blue carbon, primarily from mangroves and seagrass. It could reach 3.57 billion tonnes of CO2 equivalent, or 17% of global carbon, although it remains largely unexplored.

Research and technology would be critical in optimizing the use of the substantial carbon potential to boost economic growth, improve coastal resilience, and minimize the effects of climate change. It is also believed that with this research, Indonesia could measure its potential carbon more accurately and at the lowest cost using new technologies.

Experts from both nations will be involved in the research, including Indonesia’s National Research and Innovation Agency, Bogor Agricultural University, and the National University of Singapore (NUS). The NUS Centre for Nature-based Climate Solutions director stated that the institution is looking into the potential for research collaboration on nature-based solutions with its counterparts in Southeast Asia. Furthermore, the research will pave the path for an Indonesia-Singapore carbon-sharing plan. However, there has been no mention of carbon offsets as part of the cooperation thus far.